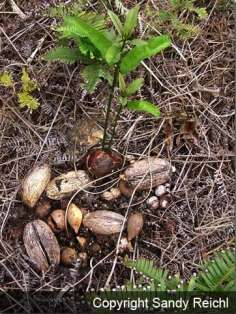 The Cassowary’s  role in the dispersal of rainforest fruit is well documented as it is the only animal able to ingest the larger rainforest fruit whole. Although, as it is often wrongly stated, not necessary for fruit to pass through the Cassowary in order for it to germinate, it does often help.

Once the fruit has passed through the bird most of the fleshy part of the fruit has been removed from the seed leaving it ready to germinate in a lovely pile of compost.

During the Nursery group's collecting of droppings many unusual items have been found in Cassowary poo:  an entire skeleton of a honeyeater, child’s coloured blocks, various sized marbles and a very small plastic car possibly from a cereal packet are just a few of the items discovered.

There is a report of a Cassowary eating the flesh from a discarded fish frame at the side of the road and many people have reported seeing them consuming flesh from road kill, usually dead bandicoots.

During the latter part of the wet season there is often not much variety of fruit for the Cassowary to choose and the birds are known to supplement their diet with fungi, flowers and some parts of ferns

One of the traffic victims after Cyclone Yasi was autopsied and found with a considerable quantity of vegetative material including grass and fungi in the stomach.

It is important to note that the Daintree is fortunate in having Black palms (Normanbya normanbyi) which regularly fruit during this lean period. Cassowary droppings can often be found consisting solely of Black Palm seed at this time of year.